reprinted courtesy of the author, Robert Dix. Originally appeared in the Journal of the American Lock Collectors Association. Robert Dix ©2005

When the words “BEST LOCK” are mentioned, most collectors will associate them with great logo locks. Logo locks usually contain the name and or monogram of a company or end user. Originally they were very difficult to get. They usually came from contacts inside the companies. Now you can get most any logo you want. Times have changed and with the change, the mystique of BEST and the fun of collecting these locks is fading.

Perhaps no other US lock company has had such great interest to logo lock collectors as BEST. Several reasons are: Quality, they cross many collecting interests with their logos, and the interchangeable core (IC) is a great concept. They hold their value and perhaps most important, their great logos. They reflect history, because only a Best logo padlock might be all that is left of a once great company that is now gone.

Part of this great interest may also be traced to the mystique that the company has always had. In the past, it was very difficult to just buy a Best padlock. My own personal experience, trying to get my first Best padlock, was bad. I tried to get a padlock and keys from the local Best distributor in Cleveland, but he would not sell to me. It was at this time that I probably developed my interest in Best products because the dealer got my curiosity up. I finally got my first Best padlock at an antique show. It was a logo and I still have it.

About that same time I met A.J. Hoffman (“Mr. BEST”) and he really got me “hooked” on Best. We studied Best in very great detail and understood how their IC system operated.

AJ and I always felt that we started Best logo collecting. The only competition that Best had at that time was Falcon Lock Company. We were forced to use their products in Best systems. Today there are a dozen or more lock companies making Best compatible products. Cores, locks, keys, pins, etc are now plentiful. Ebay has proven to be a great source of Best and Best related products.

Today, much of Best’s mystique has been removed. But their products, from the past, remain highly collectable. Best is now owned by Stanley Hardware and I think the Best name will slowly fade away.

Frank E. Best received his first patent in 1921 for a new type of padlock using the interchangeable core concept. There were many patents awarded during the 1920’s figures 1 and 2 are just two of them issued. 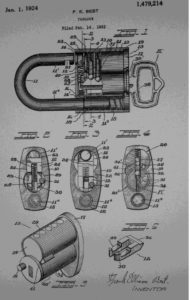 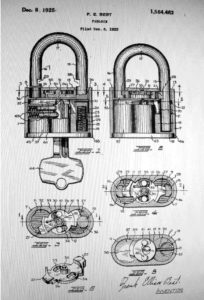 By studying figures 1 and 2 you can see all of the elements of the future interchangeable core (IC) padlocks. Perhaps the most significant differences between the two patents are in the bolt design. The bolt in figure 1 is a rotary and the lock in figure 2 has the spring bolt design found in all subsequent padlocks.

The original production Best locks were different from those made in later years. A modern core would not fit one of these locks.

However, the original cores would fit today’s locks. The difference can be found in the design of the bolt retaining plate. These early locks were quite difficult to service. Their retaining plates were staked in!

Note that 2 of the locks in figure 3 are cast bronze and the other two are extruded and machined. Also note the size of these locks. They were only 2.25”h and used a 4 pin core.

The extruded third lock has an oval shape that must have been used for a short time only. It was not seen again, however, the BEST logo remained until Best became Best Access Systems. The preferred shapes can be found in locks 4 and 5. These were popular styles for over 50 years. If you ever have a chance to get any of these locks, do so. They are very rare and command a high price. The only difference between locks 1 & 2 is the marking between the legs of their shackles, figure 5.

Perhaps the rarest and most sought after Best lock is the one with the signed top. Frank E. Best’s signature can be found between the legs of the shackle. These locks sell in the $600 to $1200 range and only a few are known to exist.

The other lock in figure 5 is marked “Protected by Basic Patents”. This marking is rare, but can be found on locks made in the 1920’s.

Figure 6 shows the small 4 pin core removed by the control key. This easy removal of a lock’s combination makes re-keying simple and rapid. The core is known as “Universal” because it will fit into any of Best’s products. Best used the name “Best Universal Lock Co.” for many years until it was simplified to just Best. Best started in Seattle, Washington and moved to Indianapolis, Indiana in the 1930’s.

HOW A CORE WORKS 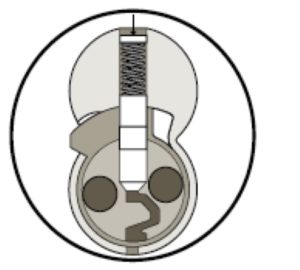 The control key should be considered the highest level key in a master key system. The core shown above is actually a modern one. The core is held together by a clip. This innovation was made about 10 years ago. The original cores were riveted together.

Also, look on the side of a modern core and you will see the date the core was made. Best has a great variety of keyways available. Including one with “PEAKS”, which is patented.


HOW A BEST LOGO PADLOCK IS MADE

A plan is needed for any project. All Best logo padlocks start out with a design which must be OK’d by the end user. Figure 7 is an actual padlock die stamp drawing for Best’s second logo, PS2.

A die stamp is then made from the drawing. There are actually three types of stamps used. One is for the flat case, another is for the elliptical and one is a rolled die (the most modern).

The die is pressed into a solid brass extrusion in the shape of the case. The pressing must be done before the case is machined. The great pressure would crush the case.

Next the marked solid extrusion is machined to receive the mechanism and core. There can be several case finishes applied next. The common one today is brushed chrome.

However, some customers want a brushed brass finish with a colored logo. The raw case is sprayed with Dyechem, a metal dye, usually in Best green. The case is then sanded on a abrasive belt to remove the excess color and leave a finely machined look to the case. The Dyechem stays in the stamped logo.

The “E” after the PS2 signified that this stamp was for “Elliptical” padlock cases.

Figures 8 and 9 are the actual stamp used to make the padlock logo on the cover. Note that the logo in figure 9 came from the drawing found in figure 7.

The machined case in figure 11 is then either dyed, machined or chrome plated. After the mechanism and core are installed the final lock, can be seen in figure 12 which is completed. These cases are sometimes clear coated.

There are over 2000 Best logos to collect. AJ Hoffman, who had the largest collection, was able to get 1000 of them. At a time when collectable padlocks are difficult to find, logo padlocks offer another collecting specialty.
However, like all specialties, they are controlled by the whims of the market. Other examples are six lever push key and pin tumbler push key locks. These locks are losing some of their appeal and their dropping values are reflecting this trend.

With Stanley Hardware buying Best I wonder how long operations will be kept in the US and what will happen to new logo padlocks.

Best enjoyed control of the IC market for many years. However, after their basic patents ran out other companies could make their own cores. It is strange that only Falcon Lock completed with Best with IC cores for years.
Now it seems that most major US and foreign lock companies have their own IC cores. The cores are still universal, with the same dimensions the original Best cores had. All cores fit all locks today.

Below are a few of Best’s first logos starting with PS1. Some are quite rare while other can be easily found today. It all depends on the quantity of locks made. Best has over 2000 logos.

WHERE BEST IS TODAY

Best was recently bought by Stanley Works. The large line of locks, especially padlocks, has been reduced. Here is their new logo:

Best has basically 3 padlock models to choose from: the 11B series (1.5’w), the 21B series (1.75”w) and the 41B series (2.0”w). These locks are still being made at the Indianapolis plant. I personally feel that the word BEST will be dropped in the future and these locks could be made in China or Mexico.

The original Best tradition does live on. Marshall Best, the grandson of Frank Best, has just started a new security business. It is in Indianapolis and known as Marshall Best Security Corp. (MBS).

Here is the new Best logo:

Marshall Best is a very refreshing new historian in the lock collecting circles. His is attempting to setup a Best Lock Museum. He already has a great collection of early Best memorabilia. The lock collecting community finally has a very knowledgeable person to talk to about Best history. Marshall has been at the Indy Show and Cleveland lock shows.
If any reader has collectable Best items or history to share with Marshall, he can be contacted at: https://marshallbestsecurity.com. It will be great to have another lock museum to visit. Perhaps someday we can see his museum as part of the Indianapolis Lock Show.

WHERE DID THE BEST MYSTIQUE GO?

All things must come to an end. The BEST MYSTIQUE came to an end when every major lock company now makes a core that will fit Best products. It ended when eBay is flooded with Best logo padlocks and their value is falling. It ended when companies, other than Best, make the tools necessary to service locks and combinate cores. It ended when almost all of the Best key blanks are available on the open market.

I dedicate this article and others to follow to my old friend A.J. Hoffman who introduced me to the mystery of Best. I have many great memories of discovering Best with AJ. No one I know had the passion that AJ did for Best. 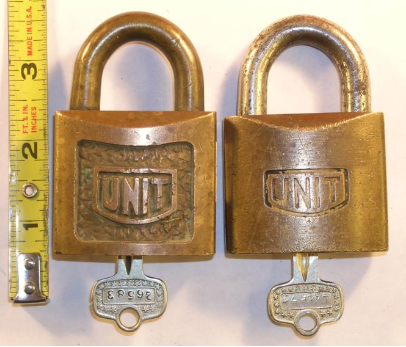 reprinted courtesy of the author, Robert Dix. Originally appeared in the Journal of the American Lock Collectors Association. Robert Dix ©2005 Best Lock Company Copies Introduction In the last issue of the JOURNAL OF LOCK COLLECTING I explored the mystique Best locks had at one time and how that mystique eroded away over the years. […]